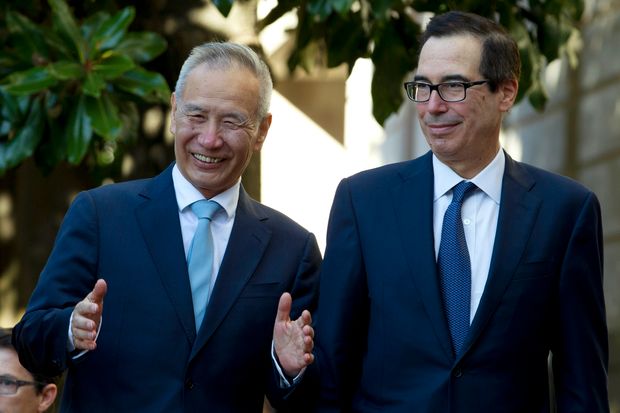 The U.S. and China took an initial step to cement a trade agreement that had been derailed, with Washington saying on Friday it would shelve a planned increase in tariffs on goods imported from China, while Beijing would increase purchases of U.S. agricultural products.

The two sides left many details to be worked out in the weeks or months ahead on tough issues including China’s enforcement of intellectual property rules, U.S. access to Chinese markets, Chinese government support for state-owned enterprises, and the fate of U.S. tariffs on nearly $360 billion worth of Chinese imports already in place.

The Dow Jones Industrial Average finished the day higher on fresh signs of trade detente, rising 319.92 points, or 1.21%, to 26816.59, but it fell from gains of more than 500 points after details of the tentative agreement came out.

The rough framework hashed out in two days of talks between senior U.S. and Chinese officials in Washington included a Chinese agreement to purchase American farm products totaling $40 billion to $50 billion, President Trump said, without specifying over what time period that would occur.

In exchange, the Trump administration said it would forgo a planned increase in tariffs to 30% from 25% on $250 billion in annual imports from China scheduled to go in place next week.

The tentative truce underwhelmed some international businesses that had been hoping the U.S. and China would finish up a deal that cemented more sweeping structural changes in China’s economy, eliminated additional tariffs scheduled to go into place in December and even rolled back existing tariffs both sides have added to imports from each country.

The planned tariff increases in December on electronics, apparel and other imported consumer goods—a big uncertainty for many U.S. firms—haven’t been shelved so far, Mr. Trump’s trade adviser, Robert Lighthizer, said in the Oval Office.

“If this turns out to be all there is, we could have achieved these results a year ago or more,” said Derek Scissors, a trade expert at the American Enterprise Institute who has advised the Trump administration.

Source: U.S. and China Reach a Truce on Trade – WSJ